September 28, 2011. New Smyrna Beach, Florida.
Hurricane Irene registered tropical storm force winds over a greater geographic area than any storm in the last 20 years according to WeatherFlow Inc., a leading provider of weather observation data and forecasting models.  Over 150 WeatherFlow monitoring stations from Florida to Maine recorded winds greater than 39 mph (tropical storm force).  The strongest gusts of 92 mph were recorded at Fort Macon, North Carolina, where the eye of Irene made landfall.  That station also saw sustained winds gerater than 39 mph for more than 25 hours (except when the eye passed over).  More than 35 WeatherFlow stations recorded sustained tropical storm force winds for greater than 12 hours straight.  The wealth of data from WeatherFlow stations and other weather stations fortunate enough to survive the storm made Irene the most well documented tropical system in history.

Wind speed data was flawlessly captured throughout Irene by the WeatherFlow Hurricane Network, an array of hardened weather stations expressly designed to survive and record hurricane force winds.   The network is the result of a company partnership with several government, research and commercial entities.  It has successfully captured the strongest winds of Hurricane Ike in 2008 and now Irene, the only two hurricanes to make landfall in the US since the network was first installed in 2007.  Irene passed in the vicinity of 79 hardened stations, and all 79 recorded wind speed and other data throughout the storm.  Many other, non-hardened WeatherFlow stations captured Irene’s winds as well. Despite Irene’s surface winds being less than forecast, about 65% of standard government stations failed during the event.

WeatherFlow data herein can be referenced in any publication as long as WeatherFlow Inc. is credited.  Complete data sets are available and are provided without charge to general interest publications.  Contact mcorey@weatherflow.com with requests for additional data. 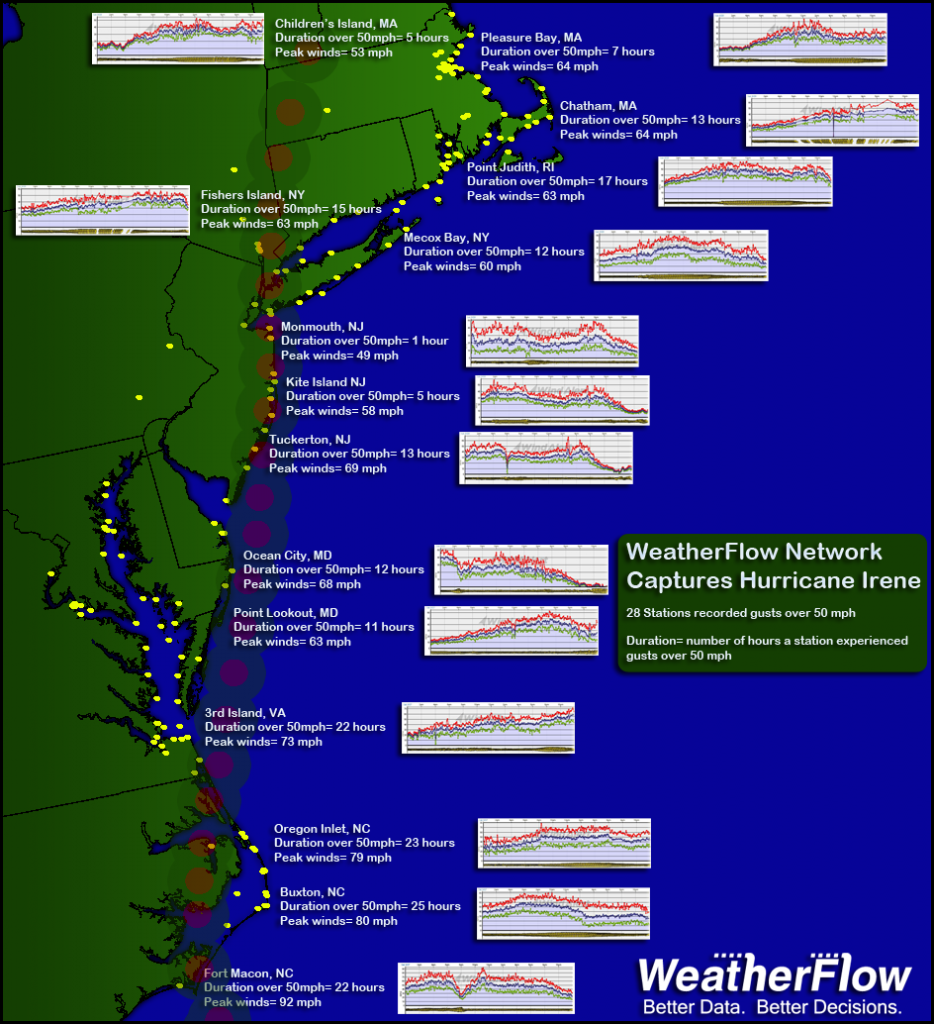